I am interested in receiving some information about the negative effects of ultraviolet rays causing damage to the tires on my fifth wheel trailer. Why are RV tires so susceptible to damage from the sun when the tires on my truck don’t seem to be affected?
What are the facts?
Murray (Alberta, Calgary) 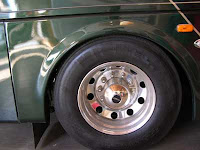 Murray, the damage caused by ultraviolet (UV) radiation as well as exposure to the ozone virtually effects all tires. RV tires in general are more susceptible to this type of damage since they are considered a slow wearing tire. RV tires typically are not driven as far or as often as regular automobile tires.

A symptom of ozone or UV damage is the evidence of cracking or “weather-checking” around the sidewall. Ozone is simply a gas that is in the atmosphere. A mutant of sorts, ozone consists of an extra oxygen molecule which is easily attracted to the oxygen in the air and just as easily attaches itself to other oxygen-related compounds such as water and carbon monoxide. The biggest detriment is that it virtually attacks the rubber in the tires and causes brittleness and a lack of pliability. The big disadvantage – ozone-produced cracks cannot be repaired or restored. The tire must be replaced.

One of the ways tire manufacturers combat ozone is by blending ozone resistant rubber compounds during the making of the tire. These special waxes form a protective barrier against the ozone, but in order to be effective, the waxes must be constantly brought to the surface of the tire. During the flexing and moving of a tire while driving, a fresh layer of combative waxes is kept at the surface. Dormant tires on stored vehicles do not receive enough “exercise” to allow the waxes to migrate to the surface and the ozone has a virtual picnic on any exposed area.

Ultraviolet light (UV), on the other hand, is produced by the sun and travels in the air as solar radiation. An invisible light, UV is harmful to all rubber, plastics, fiberglass, etc., all of which are common to RVs. The effect of unprotected UV exposure on rubber is similar to that of ozone damage – cracking, discoloration and lack of physical mechanical properties. Like the ozone war, tire makers use a carbon substance to combat the effects of UV radiation. Carbon black is an UV stabilizer that actually absorbs the damaging rays and converts them to a simple heat by-product. The carbon substance will eventually lose its ability to protect against the never-ending assault of the UV rays. Contrary to what some suppliers may say, there is no such thing as a permanent UV protector. Here are a few ideas suggested by virtually every tire manufacturer;


1. Keep RV tires clean. Avoid heavy buildups of mud, sand or dirt. Dirt on tires may act as an abrasive of sorts that could inhibit the natural wax protection achieved through normal tire flexing. Also, regular washings with mild, soapy water and a soft brush can remove significant amounts of ozone, especially if you are located in a higher-than-normal ozone area.

3. Inflate the tires to the exact requirement based on the actual weight at that tire position.

5. Regularly apply a non-petroleum-based preservative to all surface areas of each tire.

By following these simple guidelines, most RV tires will provide many miles of safe travel.